Canary Wharf Winter Lights Festival 2018 (Things to do in London) 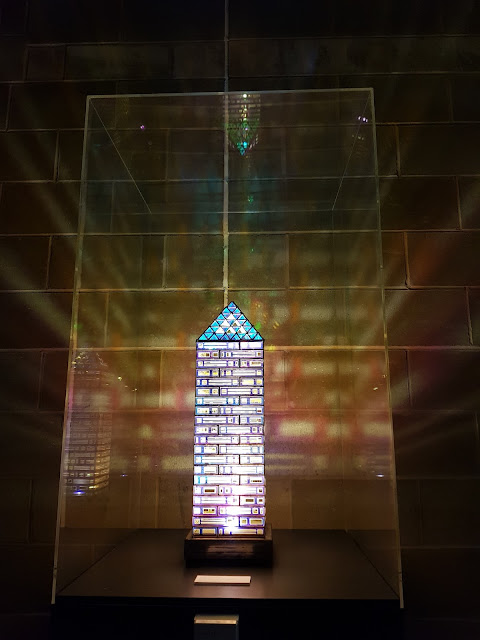 Now in my first full time job (which sadly isn’t full-time blogging…yet), I’ve realised the importance of occasionally making sure to ‘do something’ to avoid my life becoming wholly consumed by work. That’s why, whenever there’s something of interest occurring in the delightful city of London, be that a concert or something else of interest, you can bet I’ll be there.
My latest excursion came in the form of Canary Wharfs Winter Lights Festival – interesting because Canary Wharf is an area I know and love, puts on good events (you can read my experience of the Nashville Meets London festival here), and who doesn’t love a good light show? We chose to head in a weeknight – undoubtedly less busy than a weekend, and a good excuse to get up to something after work.
The lights greeted us as soon as we left the station, with a large display of moving triangles bobbing up and down right outside the exit in a piece called Abstract, with some suitably eerie music playing in the background. However strange the exhibits, they’re no better way to brighten up a cold January evening than with glorious light. 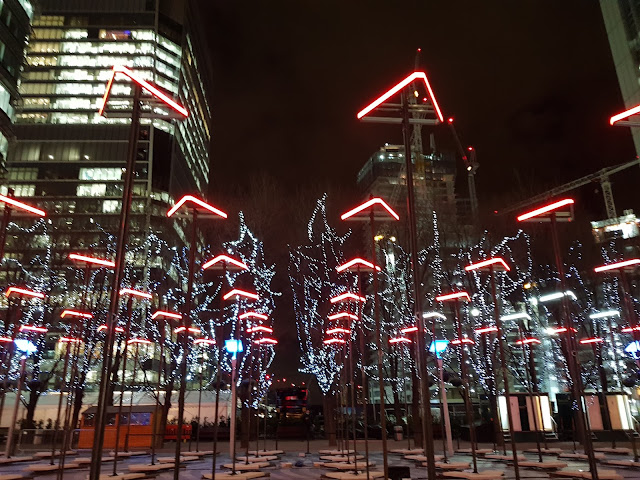 We continued on to Jubilee Park and Intrude, or 3 humongous luminescent rabbits sprawling themselves across the small city park. Heading directly into the shopping centre, we found two more installations inside, Colour Me Beautiful, where participants where projected onto the wall with CCTV type images, but bathed in bright colours, and Sunlight Graffiti. 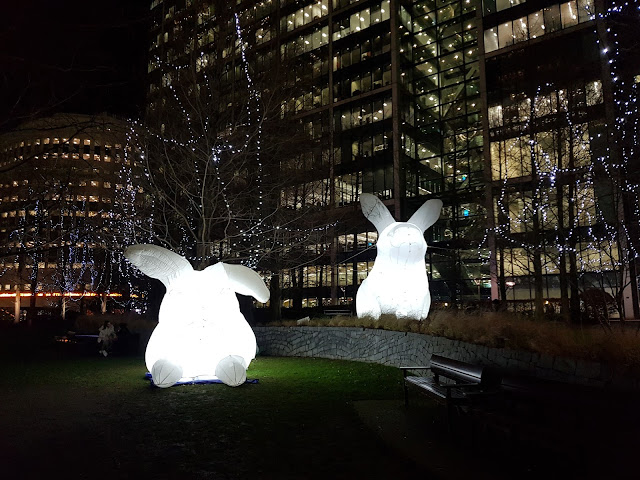 Now this was one that I particularly enjoyed. After queuing up for a short while, we were ushered into a dark box and handed a ‘Little Sun’ solar lamp. Through long exposure, you could draw shapes in the air with your light and see it all come together in a finished photograph. I thought this was great, not only because it left you with something to remember it by, but also because of its focus on environmental sustainability, allowing us to hold the power of the Sun in our hands. 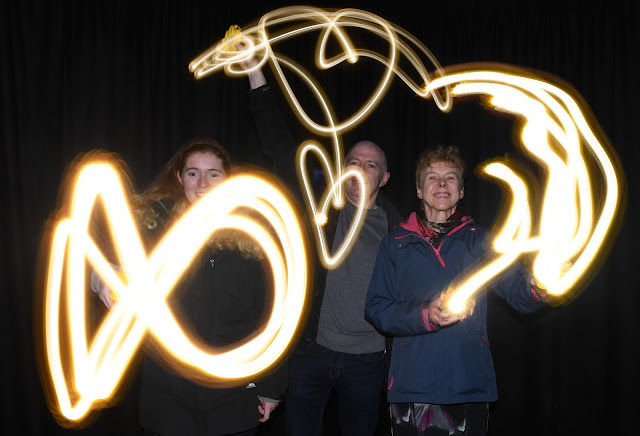 Some exhibits were a bit more difficult to find with some installations easy to walk past as simple window displays. Nevertheless, with a handy map and helpful volunteers to point you in the right direction it was easy enough to tick each one off as you went along.
Coming out of the underground again, we poked the Sonic Light Bubble which looked remarkably like a giant plasma globe. Next up was Bit.Fall, again, far more intelligent than I’d like to give it credit, as illuminated sheets of water spelled out a never-ending cascade of words plucked from a live newsfeed on The Times website. This one requires you to be quick in order to catch the words before they fell, and was great fun to pass a few minutes chanting the words out as quickly as possible.
We wandered on down to The Cube, a box of light which aimed to ‘symbiotically bond’ with the pedestrian bridge it hovered around, and Halo, which looked as it sounds, beautifully suspended over the pond in Cabot Square.
The furthest installation was found in Westferry Circus – Apparatus Florius – which was a series of strings illuminated by various coloured lights. For once, I felt that I understood its meaning as art, as it really was reminiscent of the expanse of plants and gave a somewhat jungle feel to this very urban location. This was followed by the very cool Urban Patterns, again comprised of string but this time lit with UV lights so they seemed to glow with vibrant neon, and some permanently illuminated Lightbenches in case all the walking had you tired. 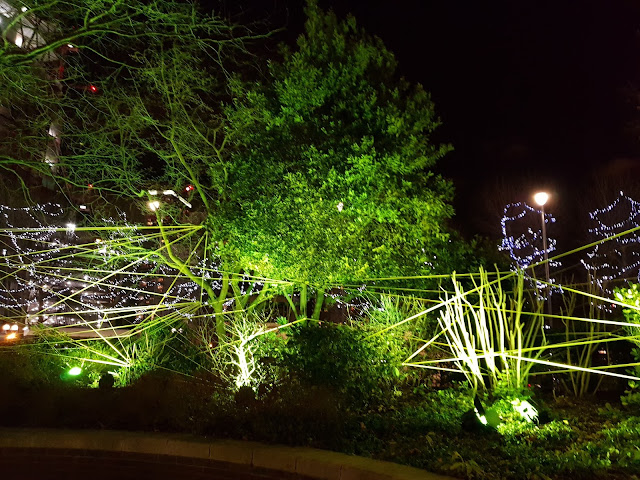 Another beautiful structure was the aptly named Dazzling Dodecahedron which was as the name would suggest a glorious jewel-like piece of art that you could even step inside if you so desired. Like this, most of the installations encouraged interactivity, and the next installation was no different where you could play with brightly coloured Pixels that shifted colour depending on which way you turned them. 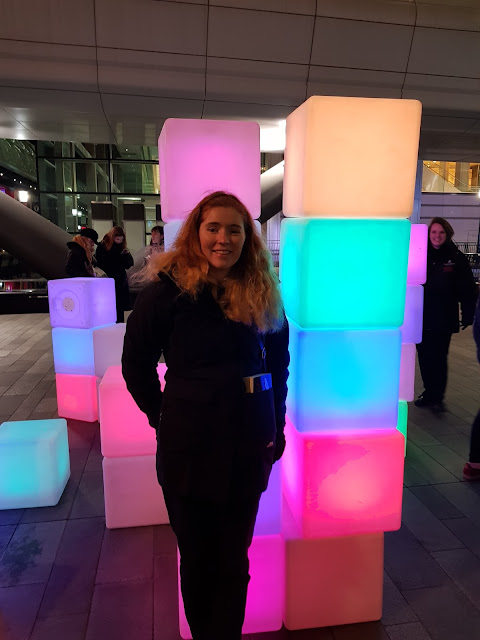 This led us into Crossrail Place which had light pieces outside, including 500 illuminated acrylic rods called We Can Meet and the hugely fun Flora, where a touchpad allowed passers by to control complex and delicate shapes projected onto a wall below. I had immense enjoyment out of flinging the dials in opposite directions and watching the lights dance crazily below me.
Up on the roof garden, we found Luma Paint Light Graffiti, where again you could draw with light and project photos onto a wall with some very cool results, and the not at all intuitive Helios, meant to represent the Sun emerging out of an eclipse and into full bloom (maybe you just have to get it…)
On the middle level of Crossrail Place was a vast collection of installations, ranging from abstract illuminated clocks in the form of Tempus, glow in the dark dot paintings in Clones (very beautiful), raindrop like bubbles of foil which bobbed up and down as if by magic (again, very cool), to the broken glass like feature of Fracture, similar to something you might see in a normal gallery. 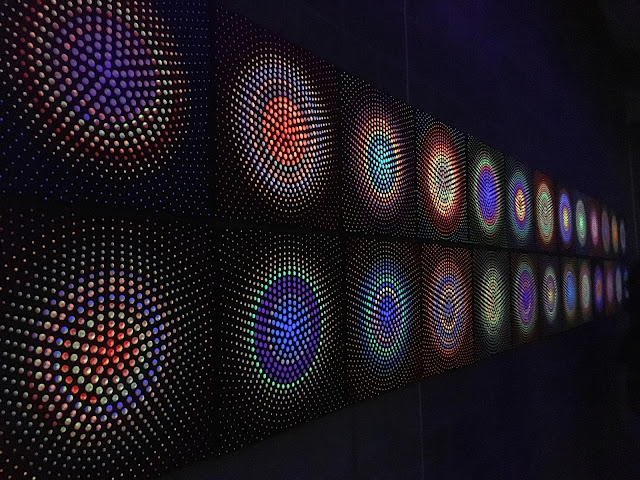 However, the real pull of this section was On Your Wavelength, an interactive light sculpture and music composition apparently controlled by your mind. Participants would put on an EEG headset and then as your thought patterns changed, the music and light would change. We watched two, very different, turns – one who clearly had a lot of brain activity going on with fast music and vibrant lights, and one who seemed to struggle to push the light up the illuminated tunnel. Fascinating.
What a wonderful evening! Fantastic installations and all within a small enough area to walk around for a couple of hours. Unlike London’s Lumiere, spread across vast swathes of the city, this one was just the right size and a wonderful way to spend an evening. Likewise, the installations were of excellent calibre and I loved the interactivity of them – no doubt I’ll be back next year. Canary Wharf, keep doing what you’re doing!
I hope you enjoyed reading about my experiences at the Winter Lights Festival! Interested in hearing more about my adventures in London, and across the globe? Drop me a follow on Twitter and Instagram @CiarasCountry for more content like this!
Posted by Ciara's Country at 08:25

Find me on social media!